I did it, y’all! I slaughtered, butchered, cooked and ate a rabbit all in the same day! I’m super proud of myself and wanna give a big ole “i told you so!” to all the silly (mostly women) people that have responded to my future plans of raising rabbits for meat with the statement: “You really think you could do that?  We’ll see, i doubt it.” I told you so, skeptics! 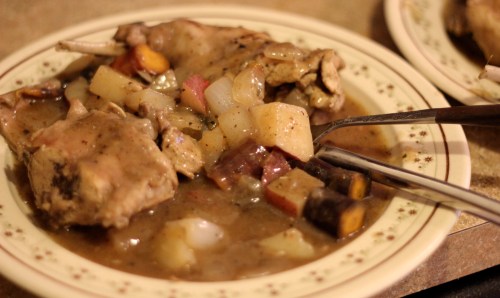 Taking a (cute and fuzzy) animal’s life may not be my favorite cup of tea, but sustaining my family for weeks of meals in 3 hours of hard work is! What a great thread we had going on Facebook last week about the reasons why so few Americans consider rabbit a ‘normal’ sort of meat for the dinner table. I wondered why you don’t find more rabbit in the supermarket, or farmers market more often. Are they expensive to raise? Difficult to prepare or market? Based on the responses i got, it sounds like The Cuteness Factor is the number one reason chicken trumps rabbit a ton to 1 in popularity. It’s a shame: rabbit is an incredibly healthy meat that is super lean and really delicious and easy to cook. It really does “taste like chicken” without the greasy decadence that goes along with bone-in chicken. I can find rabbit at our farmer’s market, but at $7.00 a pound, i’m not about to add it to my shopping basket. I am willing to drive a bit and spend a few hours to get my meat, though. So i did: 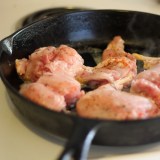 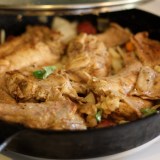 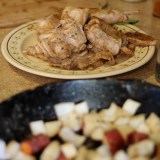 A friend of a friend raises Angora rabbits for fiber. Like any good breeder, she picks and chooses what rabbits she’ll keep to breed for future generations, and needs to ‘do something’ with the culls. She could sell them as pets or send them to someone to butcher, but because she’s chosen to remove their bloodlines from the bunny population, she wants to be sure her culls get culled. In steps Miranda! As i mentioned earlier, i have plans of raising rabbits for meat. They’ll be partially tractored, happy bunnies who will provide a large percentage of Pocket’s meat, as well as plenty of healthy meals for us. I can’t wait to learn the breeding portion, including timing the litters, not straining the does, etc etc – but in the meantime i need to learn a major skill: butchering. I will admit, i was extremely nervous. Naomi showed me how to ‘dispatch’ the first rabbit, and it seemed easy enough. We used “the broomstick method” which basically means placing a stick behind the rabbit’s neck (them them on their bellies on the ground), stepping on either side of the stick and pulling their back legs up to break their spine. Not pleasant, but not difficult and relatively painless for the animal. My first two didn’t go as well as i’d like – the stick we were using was just too big for my little feet. Once i switched to a smaller stick, slaughtering went like clockwork. I’ll spare you anymore gory details (apologies if i’ve offended anyone, but meat comes from somewhere: animals!) but in 3 hours i had 12 rabbits butchered, skinned and on ice. I gave Naomi half the meat and took have back with me, along with all the organs and even the heads to feed to Pocket and us – sharing as we do the whole chickens: giving us the meatiest portions and her the smaller bones with plenty of meat on the bone. 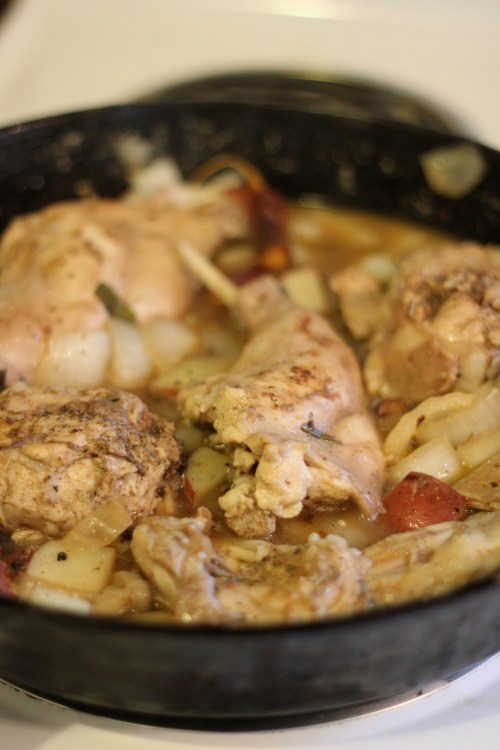 I wasn’t sure how to cook it, but it turns out it cooks just like chicken, but doesn’t have the grease to rely on for moisture. I chose to slather the rabbit, which i first quartered, in mustard and spices and cooked with potatoes and kale with some white wine. It was DIVINE! I can’t wait to cook up the next one, and am keen to try it barbecued. Finger lickin’ good, y’all! It feels amazing to be this closely connected with my food and to practice what i preach: i CAN “do the deed” and i CAN cut it up without getting queasy and i certainly CAN cook it up and eat it with relish and pride, knowing that i humanely brought this rabbit from tail to table, all by myself.

How about you – would you eat rabbit, or is it just “too cute” for you?