Remember all those chickens i culled for a friend a few months back? She needed her flock thinned and Pocket needed food, so I stepped in to do the dirty work. Since then, a few more animals have met their demise at Blakesley Creek Farm, including Abraham, the 4 year old (ish) Wensleydale ram. **Note, the following pictures are somewhat graphic.

I received a call from Lois asking if i wanted to help kill and butcher her ram who was swollen, bloated and otherwise displeased with life. I must admit, i didn’t want to. A lamb here, a rabbit there, chickens anytime: small animals i’m game to slaughter and butcher, but a giant ram is too much for me. So, some other friends helped her out and it was decided that the meat was no good for people to eat, but probably (hopefully) safe for the dogs. After getting a few tastes, Pocket became completely OBSESSED with the ram meat, so i brought the husband out and tackled the frozen rib cage and leg bones with some power tools to cut into pocket sized portions, while my friends relaxed and watched us work. There was frequent mention of “You know you’re a redneck when you spend your Sunday sitting around in lawn chairs watching your friends saw apart a frozen ram carcass (while eating a vegetarian burrito)!” Pretty hilarious. 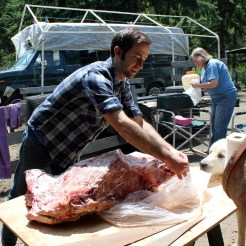 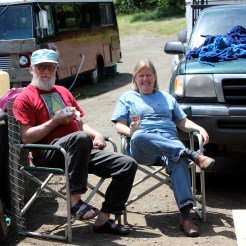 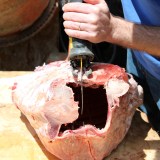 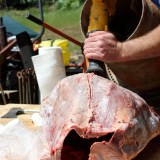 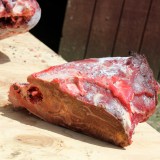 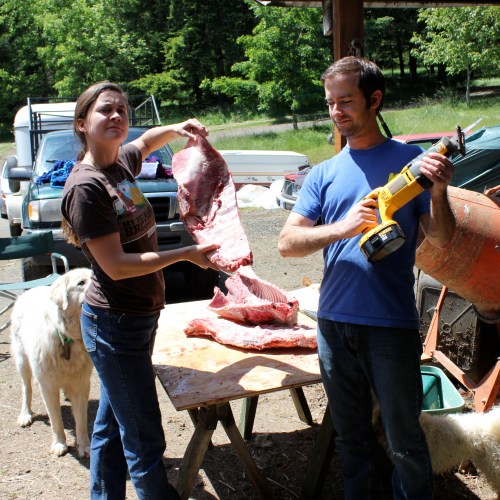 Cleaning off the power tool was a nasty job fit for a husband, while i packaged the meat up and stored it in our NEW CHEST FREEZER. Pocket has been eating well: 1 or 2 days a week she gets the big boned ram meat and the rest of her days she gets Foster Farms chicken frames and local mixed-species organs. She’s almost done shedding and will be ready for some photo ops soon.

What do you do with livestock or other animals that die on your farm? Feed them to other livestock/animals, bury them, take them to the dump?