I must preface this recipe post by admitting that i am relatively new to asparagus. I’d never eaten it growing up, and was a little bit scared of the strange looking vegetable, until i met my husband (7 years ago, WOAH, not that recent, ay?) – who only knew how to cook one thing and almost burned his apartment down doing it. One should not broil asparagus swimming in olive oil in an out dated oven…. Just sayin’ 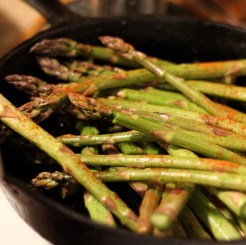 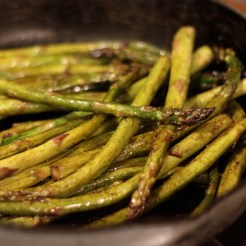 BUT i’ve come a long way, and after working at an organic garden center and pilfering their freshly sprouted asparagus spears, savoring that fresh and very “Springy” flavor, i have been converted. I’m NOT a fan of the ‘asparagus pee smell.’ Sorry if that offends you. The smell offends me! Apparently this doesn’t happen to everyone, but it happens to me and i’m not too keen on it. I will, however suffer the smell in order to enjoy the taste and absorb nutrition that fresh, in-season asparagus can offer. 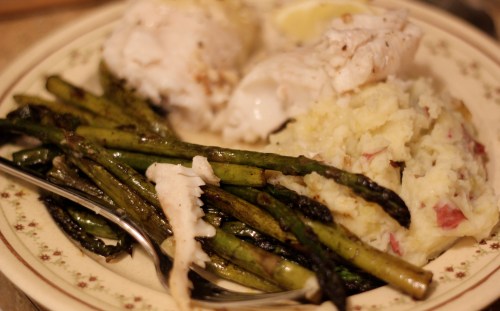 When we brought home all that fish last weekend, the first thing i thought to cook along with lemony baked cod was asparagus. It’s just that time of year and it seemed the perfect fresh ingredient to serve along the freshest fish you could eat. I’m not really a pro at cooking this recent cast member in my kitchen, but i think i nailed it. I also think i’ve invented my all time favorite asparagus recipe and will be cooking this dish again and again this season. What’s even better? It’s darned easy! I used cast iron, but you could cook this in a baking sheet in a pinch. Go with the cast iron if you have it, though. 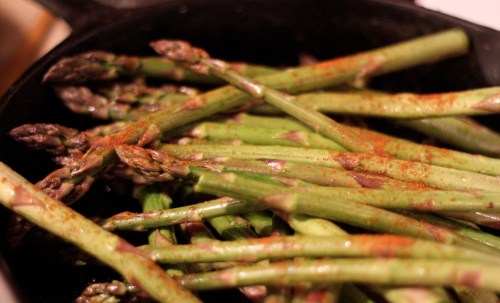 Apologies as always for the vaguery: but i think the amount of olive oil and vinegar is subject to taste. You want enough oil to coat the spears, but not enough to be heavy. You want enough balsamic to dance on the oil, but not overpower it. Think about 1 part vinegar to 2 parts oil, and just enough of both to coat the spears after vigorous tossing.You should see a light sheen, but not drip oil from a spear when you pick it up.

I like well cooked asparagus, and the balsamic will reduce while you cook, creating a candied/savory/slightly spicy/amazingly decadent tasting yet healthy asparagus spear. I put the asparagus in while i prepped the fish and through the duration of the fish cooking, which was about 10 minutes. If you find it getting too cooked to your taste, just take it out of the oven! It’s good at room temp too. This is the most “no fuss” recipe you could ask for: which is perfect for a side dish. You could even make this ahead and serve them cold as an appetizer. If you like asparagus, you must try this. Omit the cayenne if you’re serving someone with ‘heat’ sensibilities, but the slight head really balances with the sweet of the vinegar well, so include it if you can.

Are you a fan of asparagus? Do you suffer that “unmentionable” side affect after eating it?

6 Responses to The Best Asparagus