Stuffed Rabbit Roast without The Bacon (Or the Butcher’s Twine)

My Wisconsin German family may have popularized the term “The only thing better than bacon, is more bacon” but sometimes you just don’t need it to make an epic meal. I posted my ‘bacon wrapped, stuffed rabbit roast’ recipe after Christmas 2014 when we enjoyed our first stuffed rabbit roast for the holiday meal. We had PLANNED on dining on roast goose this past holiday, but Mr. Coyote (or was it Mrs. Bobcat) had other plans for us while we were away for Thanksgiving….. so it was rabbit on our holiday table again. Oh, woe is me, we had to suffer with another deliciously stuffed rabbit roast 😉 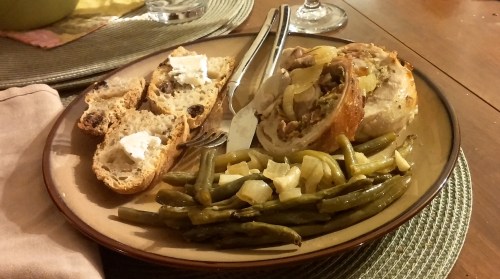 I won’t reiterate all the details of de-boning the rabbit as all that info and helpful links can be found in my earlier post, but i will break down the major ingredients and offer some tips on the stuffing and wrapping, temps and times. The major key to this dish is to choose a slightly older rabbit. You don’t want a young fryer as it won’t have enough meat, but you don’t want a rabbit much older than 4 months either or it may be tough. I chose a 16 week old doe who weighed about 5+ pounds dressed. Let’s get cooking! 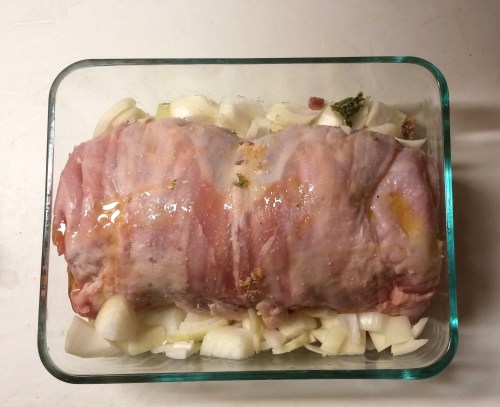 To be honest, i’m totally guessing at those quantities. It is February, after all and i cooked this in December- cut me some slack. The gist is that you want to saute your sausage or cured meat with the herbs and greens until the greens are just wilted. Mix that with the breadcrumbs to make a crumbly texture. Lay the rabbit out flat and coat with the breadcrumb mixture, top with some cheese and roll! Don’t overfill or rolling will be difficult and don’t choose any cured meats with super strong flavors as they’ll take over the meal. (More photos on the stuffing process in my older recipe post)

I tried something else different with this roast: i didn’t tie it! Many of us may lack butcher’s twine or the skill to tie with it so this technique is a cinch. Place some chopped onion in a casserole just bigger than your roast and wedge that rolled up rabbit into the pan on the onions. I swear: it won’t open and once it’s cooked it will stay together in an easily sliced log. I drizzled the top of the rabbit with some olive oil and salted to keep it from drying out. Halfway through cooking i added some fresh green beans and garlic cloves above the onions and cooked until they were soft. Delish!! 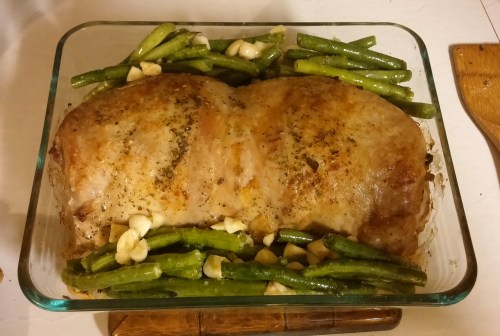 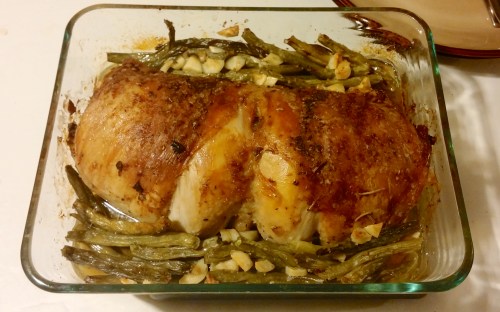 Roast at 350 degrees for about an hour adding the greenbeans about halfway through. Internal temp should reach 160.

What’s your favorite meat to use in a stuffed roast recipe?