Spring has Sprung! Sayeth our “Groundhog”

I tend to keep strange “pets.” If you’re a seasoned Austin Homestead reader, you remember that Pocket isn’t our only house pet. For the newbies, let this post serve as her introduction. Meet Holly, the Christmas Turtle. 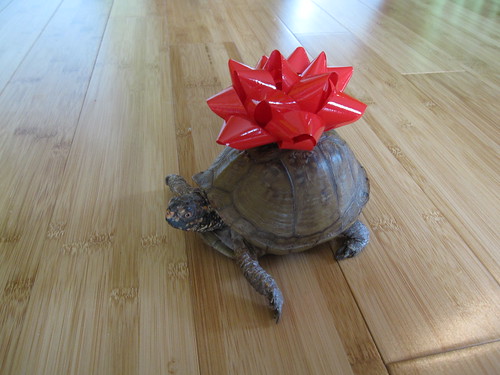 Holly may well be the “Christmas turtle” (i got her as a present 12 years ago, and she loves tree lights and scrambling around presents more than about anything), but she is also our very own Punxsatawny Phil. Holly always know when Spring has truly sprung. She gets an appetite.

Being a cold blooded little animal, Holly spends most of the Winter holed up in a corner of the living room. Yes, Holly has full run of the house. No, she really doesn’t make much of a mess (other than the occasional wet sock in the kitchen from a little turtle puddle. Gross.) I have a heating pad set up for her under the couch and can usually find her perched there or up against the space heater or Pocket’s crate. They’re good buds, for totally different species. It’s always a sure sign that Winter is nearing its end when Holly presents herself in the middle of the room with that certain expression on her face that reads “give me food NOW.” 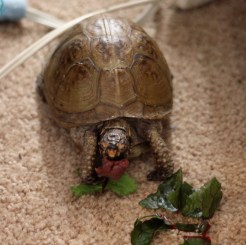 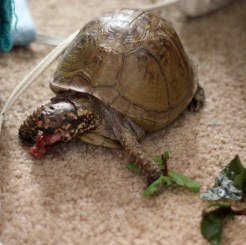 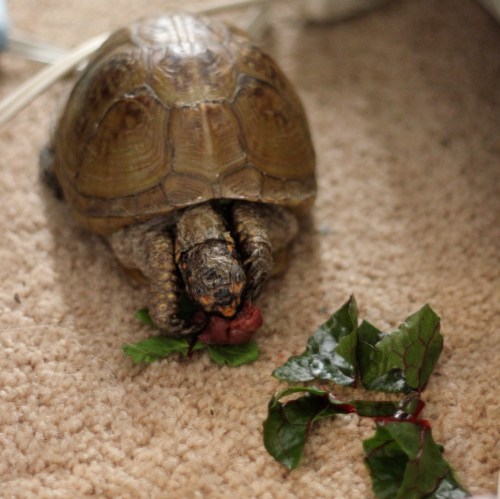 I’m an obedient pet owner and provided Holly with some chard, that she ignored, and a chunk of beef heart that she had a devil of a time masticating. Masticate she did, and now the best is released! You know how Pocket loves her broccoli? She loves it, but she makes a major mess of broccoli chunks scattered about, which Holly is happy to pick up as she strolls across the room. We’re headed back to our friend’s house to cull more chickens to feed Pocket, guess i’d better bring a shovel and bucket to dig up some worms for Holly, too!

Is it Spring in your neck of the woods? How can you tell: blooms, birds, or something a little different?