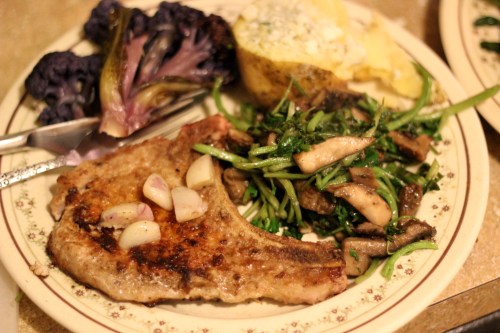 This meal was actually very easy to make and only used one cast iron pan, so cleanup was minimal. All ingredients were sourced locally, but other seasonal veggies could be substituted easily. The watercress gave a peppery punch, but could be subbed with arugula, mustard greens, spinach, etc. The garlic really made this meal rock…. or was it the butter? Or the mushrooms??  You decide.

Pan Fried Pork Chops with sauteed greens, mushrooms and a side of cauliflower 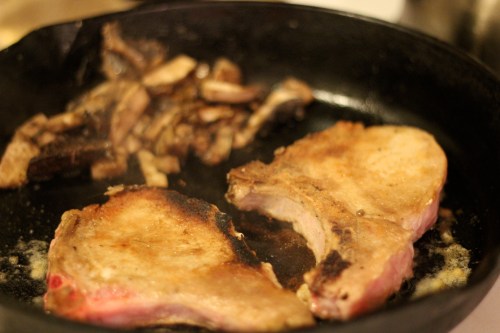 Preheat oven to 400 degrees. I used my little toaster oven. Bash garlic and halve a head of cauliflower. Place cauliflower on a sheet of foil, drizzle with olive oil, season with some salt and pepper and toss in garlic. Fold foil into a packet. Microwave pierced potatoes for about 2 minutes then put spuds and cauliflower packet into oven. Bake a total of about 30 minutes.

Prepare flour mixture on a plate. Heat cast iron pan to medium and toss in a generous amount of butter. Coat each side of the pork chops in the flour and place in the pan with plenty of space. Chop the mushrooms and set in cast iron pan to one side of the chops. Cook pork chops until browning lightly on the underside and flip. Time variable depending on the cut of your chops. Cook other side until internal temp comes to at least 145 and juices run clear. Set chops aside on a plate or on the oven. Chop watercress roughly and toss into cast iron with a bit more butter and saute with some salt and pepper and the mushrooms. Cook until wilted. 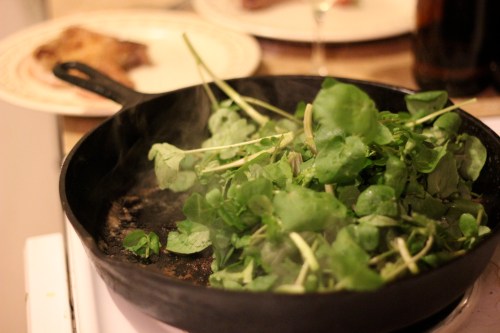 Serve with the roasted garlic sprinkled on the chops and maybe some blue cheese on the potatoes and get ready to tuck in to one heck of a swell supper. It’ll put some meat on your bones! Great for a cold evening after a day working on fence lines… or in my case sitting on my butt felting cute animals all day… i think i’ve put on a few pounds this season already. 😉 I can’t wait to have my own pork on that plate – and i think guinea hog chops will be especially suited to this meal and will def be prepared for visiting parents!

What’s your favorite way to prepare a pork chop?