I’m a fairly new knitter. I learned to knit so that i could DO something with all my pretty handspun yarn. So far, i LOVE it. I love knitting like nothin’ else: it’s relaxing, it’s precise, it’s organic, it’s meticulous and it creates warm, comfie things. What’s not to love? Learning the stockinette stitch sent me into fits of joy after years of crocheting bulky hats that looked so not professional. I’ve been knitting for over a year now, am getting a handle on how to read patterns though haven’t dabbled in charts yet, and have become something of what my friends call “an intuitive knitter.” I just cast on and go, with relative degrees of success.

My big project of early summer was a hat for my husband, which turned out GREAT. Now it is time to knit something for me using that beautiful pygora 3-ply i finished up a month or so ago. Although i’ve never worn a cowl or knitted lace, i decided to experiment with the basics of lace knitting that a friend showed me to knit up a warm and autumnal/fashionable cowl. I figure, i like scarves but hate tucking the ends in – a cowl should be great! 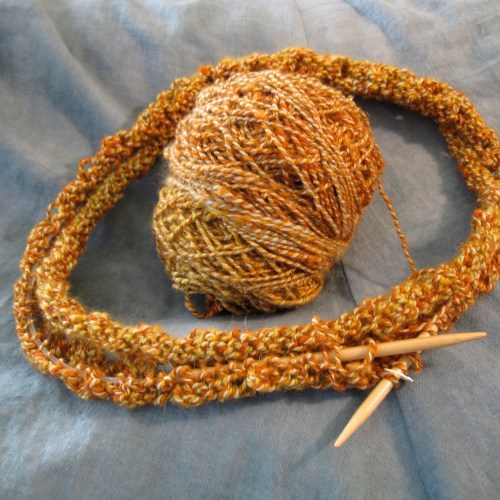 I had no idea how long to make it and i didn’t feel like swatching so i guessed at how many stitches to cast on. I ended up with an even 100 and i’m knitting on fairly chunky size 8 bamboo circular needles. The band is neither long nor short, probaby 18 inches? i haven’t measured. The yarn isn’t laceweight since i plied it with 3 laceweighted singles, but it isn’t chunky either so the resulting stockinette is fairly loose, which was my goal. I knit stockinette for about an inch to get a nice curl at the edge and then started a ‘lace’ row. 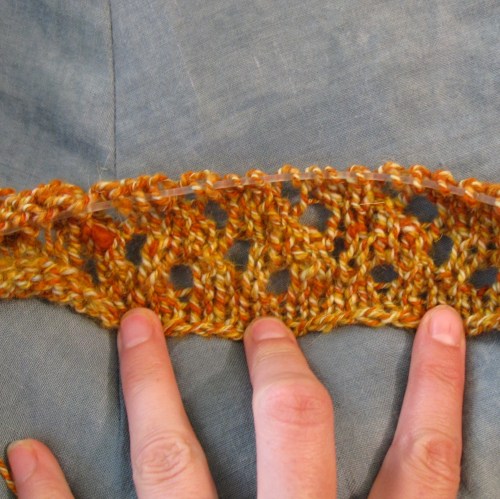 For the basic lace i use the following row in repeat: K2, YO, K2TOG  repeat all the way around and then do a row of knits. In non abbreviated yarn speak that’s : knit two stitches, yarn over, knit two together. This leaves you a lacey ‘hole’ where the yarnover is. I continued to follow this pattern, being sure i do the yarn over and k2tog above the same stitches below so that the hole naturally moves in a diagonal along the piece. I messed up last night and got the hole spaced wrong, so i quit for the night and did a few rows of knit for a section of stockinette. i think i’ll do that for a section that’s about 4 inches or so and then do the lace pattern again. This is a TOTAL EXPERIMENT and so far is looking cool – but i really have no idea how it will fit or if i’ll like how it looks at all. That’s the beauty of knitting, though. If i hate it, i can always rip it out and start again. I still enjoyed the knitting process, so the time hasn’t really been wasted, per say. PS: knitting with this pygora feels almost like knitting cotton – the 3 ply makes it a little less stretchy than my normal 2 ply, goat fiber in general is less stretchy than wool, and it’s sooooo soft. Love it! I’m also learning about my handspinning as i use this handspun yarn and experience any variances that snuck into the twist. More on that later.

Pigs are my new obsession. We won’t be getting any until we’re more settled with some other hoofed animals, but i love them and their wiggly noses and tails. I also love eating them, so we’ll probably start our pig raising future by growing some ‘weaner pigs’ to butchering weight. I hope to eventually keep a breeding pair, but that will come later. In the meantime, aren’t these two the cutest thing? 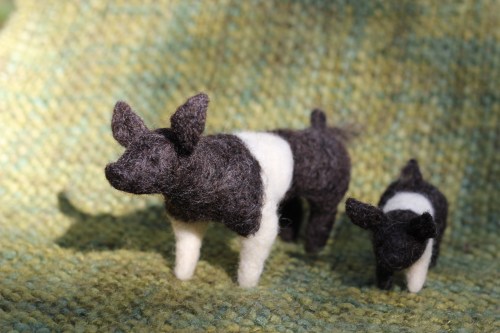 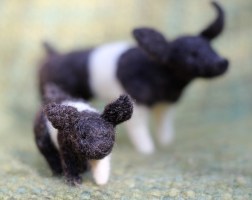 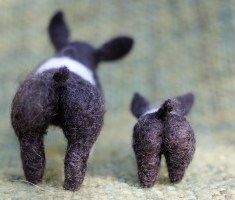 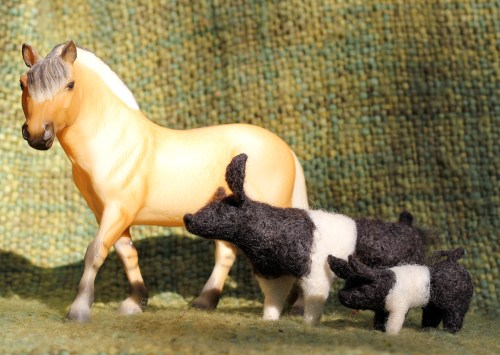 Sized to match the largest Breyer Horse line (pictured above with a Norweigen Fjord pony), this sow and piglet would make a great addition to a Breyer barnyard or some farmy dolls. They’d be happy scampering about your curio cabinet as well and are felted firmly enough to be suitable for gentle play. As always, these toys are NOT for kitties.

I’m still working on some baby toy prototypes, so if you haven’t already, comment on last week’s Fiber Friday post for your chance to win a free Fiber Friend for your baby!