There may be a fancy name for this dish, but since i winged it as usual i’m just going to call it delicious! Cooking meat and working with a fine cut tends to makes me nervous and i often have a hard time deciding what exactly to do with it. Thanks to all my friends on Facebook for offering suggestions on how to cook backstrap – you had some great ideas! One note before we get started – always choose a delicious red wine that tastes good by itself and compliments what you’re cooking. I used a temprenillo for this dish: a little smoky/spicy with good body and not at all sweet. 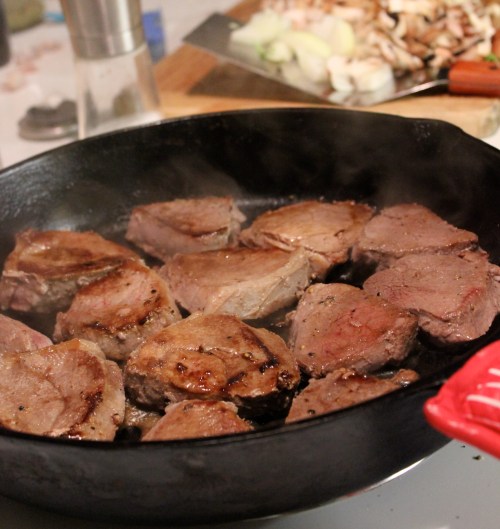 I puzzled over what to do with this fine cut of meat: elk backstrap. I considered roasting, baking, grilling – and finally chose pan searing when i discovered that the loin was already sliced into medallions. I almost always cook meat with a light dusting of cornmeal in a well buttered cast iron pan, so i wanted to do something differently. What goes well with every cut of red meat? Red wine and mushrooms, of course! A good red wine sauce can salvage most botched cooking adventures and is even better with a well prepared meal. I lucked out this time, but as this was major experiment, please use this “recipe” as inspiration only. 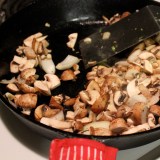 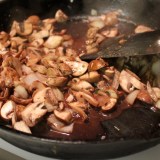 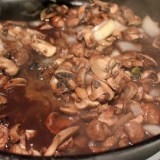 Here’s how i muddled along: Heat a large, heavy cast iron to medium heat and toss in some butter. Meanwhile salt the meat and pat the moisture off each piece as your drop them in the buttered pan. Season with salt and pepper. Cook until brown on one side (shifting the cuts around the pan if the center of your pan gets hotter than the outside like mine does – stupid electric burner). Flip until you see a bit of blood on the top of the meat. Remove from pan and place in a warm oven – about 200 degrees (optional). You’ll want to serve the meat rare to medium rare to preserve the tender texture so be careful not to over cook it. I cooked mine a bit too much, though it was still delicious. Toss the mushrooms into the cast iron pan, sprinkle with a teeny bit of flour and season to your preference. Cook until starting to soften. Turn pot on for veg to begin steaming (i use a steamer rack). Add a few glugs (about 1/2 – 3/4 a glass) of red wine to the mushrooms and cook down until the mushrooms are soft and the sauce is thickened. 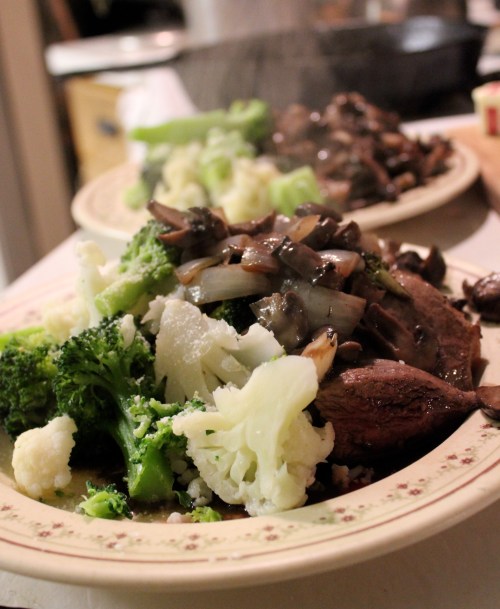 Serve with buttered veg and slathered meat. A  meal fit for a king and queen! A potato or noodles would round out this meal well – but we were stuffed as it was without the carbs and appreciated the high protein feast after a long day of work. The leftover medallions made epic lunch sandwiches!

What’s your favorite way to prepare a tender cut of meat?