Like much of the country/world, we have been dealing with increasing temperatures here at Birdsong Farm Oregon. Last year we lost a half dozen nests of Muscovy ducks due to the heat frying the eggs under our half barrel nests without any proper shade. It was a total tragedy that left our mother hens confused and distressed – one we have not forgotten and do not want to repeat! Since our pasture has but one shade tree on it we had to get creative. Enter Miranda’s brain and sketch book, some materials on hand and a killer deal on some Ebay shade cloth. I hope this post may be of use to you! 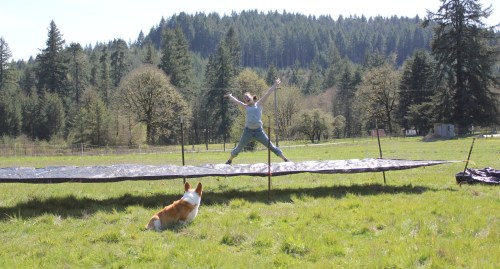 Assembling these two areas of shade took us a few hours on a beautiful sunny day listening to birdsong. How we did it:

First we drove two T-posts near the rear of our nests (full of setting hens). I tied many lengths of baling twine together to create a long 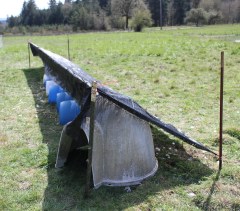 ‘rope’ that stretches much less than actual rope and utilized free/trash materials on hand. We then measured from the first set of T-posts about 5 feet so that the 7 foot shade cloth would reach and also drape over for more early morning shade. We drove these posts at an angle so that the tension of a tight rope between them would pull them in less. Once all the baling twine was tightly secured we cut the shade cloth to length and attached via small cable ties. This shade cloth came with hemmed edges that i rolled around the baling twine and tightly secured the cable ties.  The center of this long run sags somewhat so we plan to add a 5th t-post to the center on the high side. I also put a stake at the center of the low side to keep the shade cloth off the back of the nests. 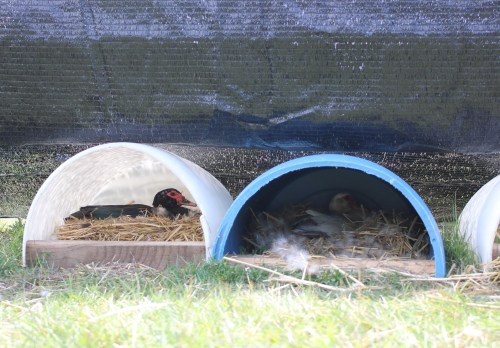 For the ‘grow out area’ we just needed as large a shaded area as we could make. I decided not to angle it and to just make one long rectangle about 2 feet off the ground. We drove the first 2 t posts about 30 feet apart and tightly tied the baling twine between them, then adding a third t-post in the center, attaching the existing twine to that post with a second, shorter piece of twine. Next we measured and cut the shade cloth and attached the first long side. Using the shade cloth as a measuring tool we drove the next three t-posts. * all t-posts in this structure were driven at a slight outward angle to manage the tension. We placed the cloth low so that there would be less potential stretch/sag. We ran the same long rope of baling twine around the entire perimeter, securing at each corner firmly. 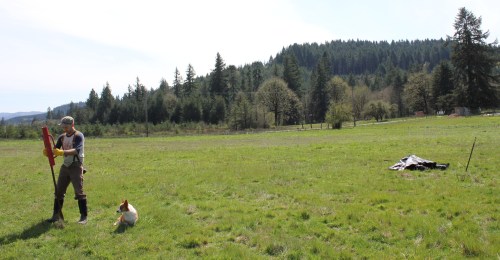 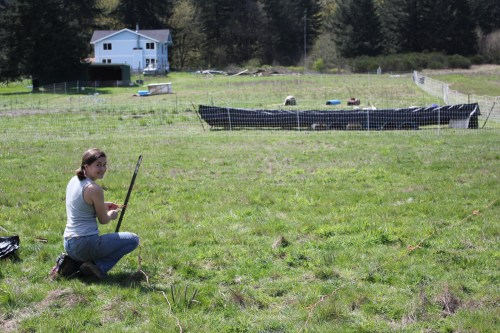 After getting the cloth all attached we notice that it sagged somewhat. So, i made two ‘x’ patterns with the baling twine under the cloth from corner to center/ etc: 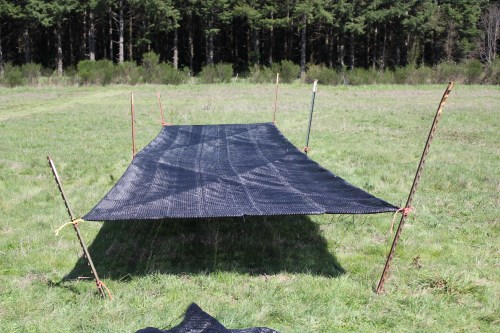 We then thought to ourselves: “Growing Muscovy ducks really like to fly and land on their houses. One duck trying to land on this will ruin it completely….. perhaps we should try and prevent that.” So we strung two more lines of baling twine above the ‘roof’ to hopefully thwart their interest in jumping on this. We’ll see how THAT goes. 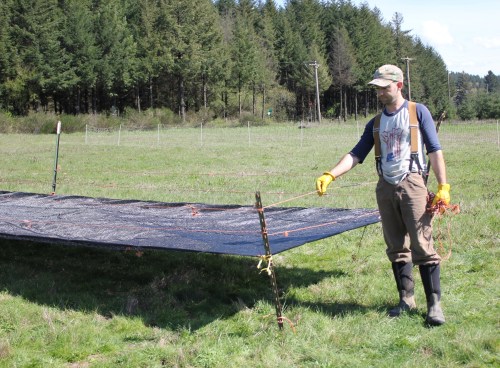 It rained last night which caused quite a bit of sagging, but as it dried the sag decreased. This will be a season of experimenting with this. For our meat chickens we plan to build a very simple/lightweight tractor with shade cloth on top that we can move around. I’m sure we’ll have new trials to learn from, but learn we will and new strategies will we develop! The great thing about this system is that we can ‘easily’ move it to a new position in a new season and don’t have any heavy tractors to lug around. The t-posts can be pulled using a car jack. Ask me at the end of hte summer how much i am excited about cutting all the cable ties and re-doing this system a few feet away vs just dragging a tractor….. haha. The nice thing about this is that we purchased very few materials and didn’t need to ‘build’ anything… so, pros and cons. 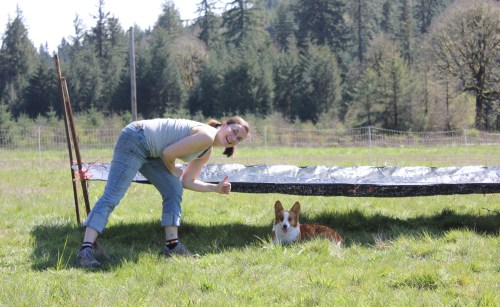 One Response to DIY Pasture Shade / AKA ‘No More Fried Ducklings’